In 2019, the biggest cloud customer in the world will be the United States Department of Defense. The DoD is currently reviewing bids to award a single cloud provider a multi-year contract. Obviously, this isn’t your typical enterprise IT department, transferring from on-premise servers, or a startup who needs the flexibility of cloud infrastructure to scale. The program is called the Joint Enterprise Defense Initiative, or JEDI, and its purpose is to move the DoD’s massive computing systems into the cloud. This one contract is worth $10 billion, or 25% of the current market, which currently stands at $40 billion in annual revenue.

Many prognosticators and reporters unanimously believe the contract will go to Amazon Web Services. This belief is so strong that vendors, such as Oracle and IBM, made a rebuttal to Congress, believing the terms of the proposal favored Amazon. However, the majority of these forecasts overlook Microsoft’s strength in security and IT, and the alliances Microsoft has been forming with the DoD since Satya Nadella became CEO in 2014. Admittedly, guessing a company other than Amazon will win the Pentagon contract is a pure gamble, however, there are strong indicators for Microsoft that should not be overlooked.

The Pentagon contract will move 3.4 million users and 4 million devices off private servers and into the cloud. The security risks of using servers outside the Pentagon’s domain are offset by physically separated government regions and hybrid solutions that extend on-premise servers by adding the cloud where necessary. The benefits of artificial intelligence, deep learning, and other technologies like virtual reality are essential for modern warfare as real-time data will inform missions when soldiers are in the field and also help to prepare them for combat.

“This program is truly about increasing the lethality of our department and providing the best resources to our men and women in uniform,” the Defense Department’s chief management officer, John H. Gibson II, told industry leaders and academics at a public event. Developing the system “will revolutionize how we fight and win wars.”

The DoD will not be the first to make a big move to the cloud. John Edwards, the CIO of the CIA, called moving to the cloud in 2013 ‘the best decision we’ve ever made.” According to Edwards, the 4,000 developers across the intelligence community work in the cloud environment, rather than individually provisioned workstations, which means the scalability does not come at the cost of the security. The Intelligence Community’s Cloud Services contract, called C2S for short, enhances security by not connecting to the internet. The results are better than expected as what used to take 180 days to provision a single server, improved to 60 days, and now takes a few minutes due to virtualization.

JEDI Awarded to One Cloud Provider

One point of contention during the request for proposals, released on July 26th, was the stipulation that the contract be awarded to a single cloud provider. This provision caused a rebuttal to be sent to Congress as it narrows down who can compete on these terms. There are nine tech companies who have voiced opposition to the government awarding the JEDI contract to a single provider, including Oracle, Microsoft, IBM, Dell, Hewlett-Packard, Red Hat, and VM Ware.

While some cloud providers argue it will make the JEDI program less secure to be with one provider, this isn’t necessarily true as working with multiple providers introduces new vulnerabilities. One reason for this is that “managing security and data accessibility between clouds currently requires manual configuration that is prone to human error or resource limitation and therefore introduces potential security vulnerabilities,” as stated in the Pentagon’s response.

There are further disadvantages to storing data in separate silos across multiple vendors, which can weaken machine learning and artificial intelligence capabilities, reduce training performance and lower accuracy. The DoD is seeking to remove data silos as they move from their legacy systems, which are scattered across 500 individual cloud efforts.

The Case for Amazon

Amazon’s significant market share is one reason it is favored to win the contract. To put it simply, Amazon has the infrastructure and security clearances to meet the proposal’s guidelines while the majority of cloud contenders are too specialized to contend, such as Oracle with its flagship databases, or VM Ware with virtual machines. These limitations ultimately prevent these companies from meeting all of the proposal’s criteria.

Proponents for Amazon also point to the CIA contract that was awarded to AWS in 2013, which was a $600 million computing contract that services all 17 agencies in the intelligence community. Notably, for the last five years, Amazon has proven it can manage sensitive government information. Last April, Defense secretary Jim Mattis praised Amazon to lawmakers at a hearing when he said, “We’ve examined what CIA achieved in terms of availability of data” and “also security of their data, and it’s very impressive.”

The Case for Microsoft

The CIA contract was decided in 2013, but it wasn’t until 2014 that Satya Nadella started his tenure as CEO that the MS cloud platform Azure began its rise. Nadella worked his way up through the company over the course of nineteen years to president of the cloud business. At this point, Nadella is not backing down with recent Level 6 security clearances anticipated in Q1 2019, which will put Azure on par with AWS with top-level security (more on this below).

There are many instances in the last four years where the DoD continued to choose Microsoft for software and operating systems. For instance, in May of 2018, the United States Intelligence Community extended its agreement to use MS products such as Azure Government, Office 365 for US Government, and Windows 10 in a joint licensing agreement with Dell. In this announcement, MS stated that over “10 million government customers from every federal cabinet level, including the Department of Defense” rely on MS’s Cloud for Government. 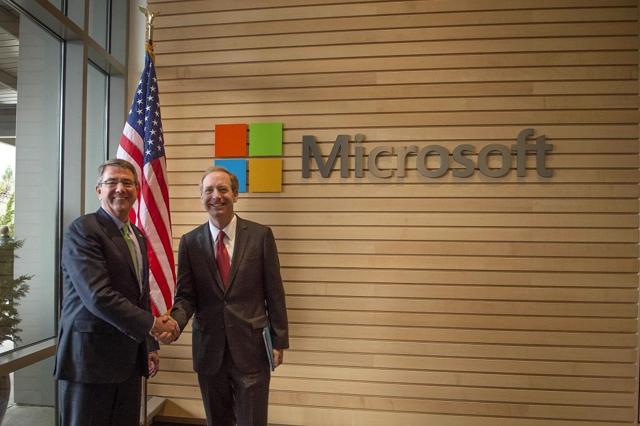 In 2016, MS won a five-year contract to provide technical support to the Defense Information Systems Agency (DISA). In 2016, the original Windows 10 agreement that took effect in 2017 included 4 million laptops, desktops and mobile devices. More recently, in November of 2018, MS won a $480 million contract with the U.S. government to bring 100,000 augmented reality headsets into the military’s arsenal. The two-year contract will help soldiers prepare for combat training.

The question that remains is if the Pentagon will want to use Amazon for cloud infrastructure while using Microsoft for operating systems and software? If the Pentagon truly wants one provider, then Microsoft can offer an end-to-end solution for the DoD. This will be especially important as we see edge device computing built out, which Microsoft is preparing for with Azure Sphere.

We can also see from the timeline of MS’s press releases that the company is preparing to be a strong contender with Amazon on security:

*Level 5 security is what Microsoft currently holds while Level 6 is what will be required by the Pentagon and is what Amazon currently holds. Microsoft will achieve Level 6 by Q1 2019. Here is a snapshot of the different levels of security authorizations (image source: Defense Information Systems Agency) 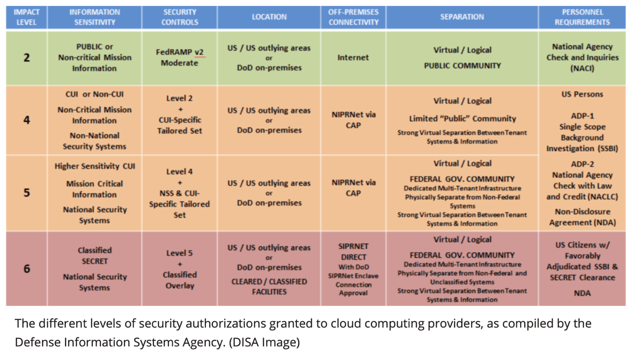 Microsoft has had a long relationship with the government that precedes the 2013 CIA contract. At the time of this contract, MS was not a cloud contender, but Satya Nadella was determined to change this. MS will soon be an apples-to-apples contender with AWS on security, hybrid solutions and government cloud regions. Meanwhile, MS has secured the operating systems and software used by the Pentagon, through licensing with Dell. If the DoD were to choose Amazon, they’d still have to work with Microsoft on security, and would technically be working with two vendors. However, if the Pentagon wants one provider for end-to-end cloud computing, software, operating systems, and edge device computing software such as Azure Sphere, then Microsoft is the clear choice.

Disclosure: I am/we are long MSFT. I wrote this article myself, and it expresses my own opinions. I am not receiving compensation for it. I have no business relationship with any company whose stock is mentioned in this article.