I started covering International Business Machines (IBM) almost ten years ago. By then, I was attracted by the company because of the massive opportunity I saw in the cloud computing industry. My bullish views intensified when the company promoted Virginia Rometty to become the CEO. Since then, the company has continued to deteriorate and its total returns for the past ten years of 5.6% have trailed that of the S&P’s 13%.

In 2018, the company’s losing streak continued, shedding more than 22% of value compared to a S&P 500 decline of 5%. Its old-tech peers such as Microsoft (MSFT), Oracle (ORCL), Cisco (CSCO), Intel (INTC), and Apple (AAPL) have continued to transform their businesses, which has lifted their stock by triple digits in the past ten years compared to IBM’s 35%.

The company’s decline has been contributed by a number of factors including the falling revenues, net income, free cash flow, and margins. The declines have been amplified by the entry of new companies such as Amazon (AMZN), Alibaba (BABA), and Alphabet (GOOG) that have taken market share in some of the biggest industries that IBM operates in such as cloud computing. This has left the company playing catch-up to these entrants. As such, while the growth in cloud segment has been impressive, the company will have a challenge of competing with the newer entrants that provide complete suits of services. In fact, in the last quarter, the cloud segment had a 22% growth, which was lower than the AWS and Azure, which gained by 50% and 89% respectively.

The chart below shows the annual run rate of key cloud computing vendors.

The decline of the company’s stock has led to a decline in price-to-earnings, price-to-sales, and price-to-cash flow multiples. This undervaluation coupled by the company’s attractive dividend yield and reducing share count has led to many investors – including Warren Buffet – to bet on the company’s future. Lacking a catalyst to push the stock higher, these investors have been forced to rush for the exit.

In 2018, the company reported relatively better-than-expected numbers but investors were unsure about its growth potential considering the impressive growth by the peers in the cloud computing industry like Alphabet, Alibaba, Microsoft, and Amazon. In the first quarter, the company’s revenues came in at $19 billion, which was a beat by more than $300 million. The EPS of $2.45 beat the consensus by $0.04. In the second quarter, the revenues of $20 billion beat the consensus estimate by $120 million while the EPS of $3.08 beat the consensus estimate by $0.04. In the third quarter, revenues of $18.37 billion missed the estimates by $330 million. The miss was mostly because of the declining Cognitive Solutions and Technology Services and Cloud Platforms. For the final quarter, the company is estimated to generate revenues and EPS of $21.86 billion and $4.25. In total, the company is estimated to deliver full year revenues of $79.1 billion, which is flat from what it generated in 2017.

One of the company’s biggest stories in the year was a report by Stat said that the company’s Watson product had recommended ‘multiple examples of unsafe and incorrect treatment recommendations.’ This news came shortly after the company laid-off a number of Watson engineers and was big for three main reasons.

First, in the past decade, the company has invested billions of dollars to develop Watson, a product it believes can help professionals in virtually all industries. Doctors can help diagnose illnesses faster while banks can respond to customer’s queries faster and better. The product does this by studying millions of structured and unstructured data using IBM’s DeepQA software and other algorithms. Second, if Watson fails to deliver, it could lead to cancellation by companies that already use it. Potential clients can also abandon the plans to use the platform. Indeed, the numbers for Watson according to a report by Morgan Stanley are not in its favor as shown below. Finally, the company has clearly pivoted to Cognitive and cloud computing. Therefore, if it fails, it will send the company back to the drawing board. 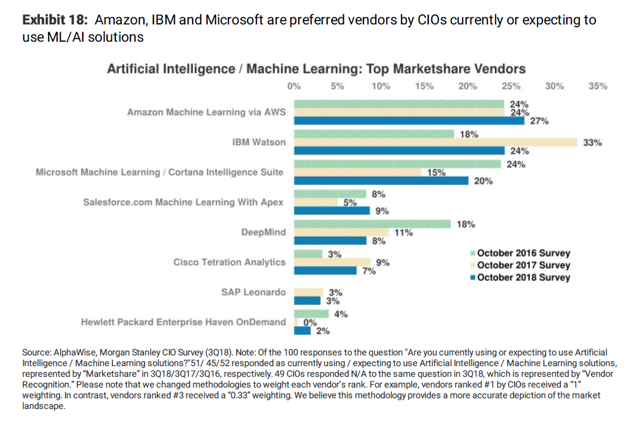 While this was big, the biggest news came when the company announced the acquisition of Red Hat (RHT) for $34 billion. The company hopes that RHT will help it boost its market share in the cloud computing industry. I have been critical of the deal for three main reasons. First, IBM overpaid for the company. Second, I believe that Red Hat will not add much value to IBM’s cloud business. This is because less than 50% of RHT’s business comes from cloud computing. When announcing the deal, Rometty said that:

The acquisition of Red Hat is a game-changer. It changes everything about the cloud market. Most companies today are only 20 percent along their cloud journey, renting compute power to cut costs,” she said. “The next 80 percent is about unlocking real business value and driving growth. This is the next chapter of the cloud. It requires shifting business applications to hybrid cloud, extracting more data and optimizing every part of the business, from supply chains to sales.

The final big news for the year was the company’s decision to sell its software portfolio for $1.8 billion. While this was a step in the right decision, I believe the company can do more by exiting lower margin businesses like consulting. I have argued about this before in this article.

In 2019, investors will continue to pay a closer attention to the Red Hat deal. With RHT trading at $175, below the acquisition of $190, investors are pricing in a 10% that the deal will not materialize. Even with the hefty break-up fee, I believe that this will be the best scenario for IBM for the reasons I stated above. Further, evidence from the past show that moneyed companies like IBM make mistakes in their big acquisitions. Examples of these ‘distress’ acquisitions are General Electric (GE) and Baker Hughes (BHGE), Sears (SHLD) and K-Mart, Hewlett Packard (HP) and Autonomy, Microsoft (MSFT) and Nokia (NOK), HP and Compaq, AOL and Time Warner, Mattel (MAT) and the Learning Company, and Yahoo and Tumblr among others. The chart below shows the stock performance of the acquiring companies after the deal is announced. 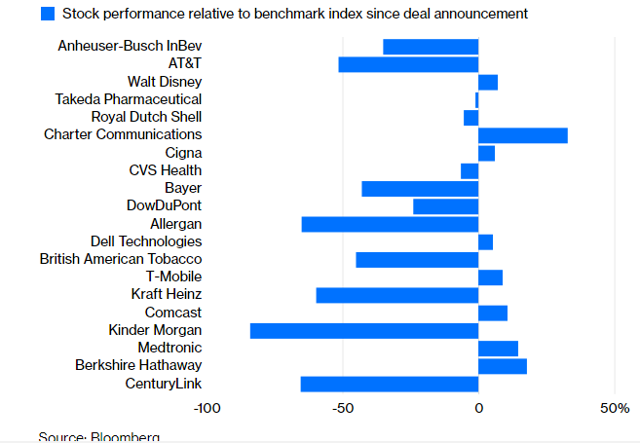 IBM and How Companies Die

The decline of IBM presents an interesting case about how companies die. It starts with relatively successful companies that are disrupted by smaller companies. In the case of IBM, the disruption started more than 35 years ago when startups like Microsoft, Apple, and Dell came into the scene. This disruption has continued with relatively new companies like Alphabet, Amazon, and Alibaba.

To build confidence with investors, the company increases its dividends and starts expensive share buyback programs. In the past ten years, the company has spent more than $40 billion on share buybacks that has reduced the outstanding shares from more than 1.35 billion to the current 908 million. It has also spent more than $60 billion on dividends. It has done this by a combination of free cash flow and debt. At the same time, it has slashed its research and development costs from more than $6.3 billion to $5.7 billion. Recent research has cast doubts on the success of IBM’s buybacks on shareholder returns. The same trend is clearly evidenced for other companies like General Electric, which has spent more than $40 billion in buybacks since 2015.

If you ignore the current stock price, a company repurchasing its shares is simply giving away its cash and reducing its share count; it creates no value. If you don’t ignore the share price, share repurchases are highly pro-cyclical, pushing up share prices in a bull market and raising the possibility that the company will be short of cash in the next recession… Martin Hutchison

Finally, companies in their final phase tend to spur growth by making large acquisitions and as I have explained above, IBM has followed this process. Therefore, while strategic acquisitions done at a reasonable price are good for the company, the fact is that many large acquisitions have failed to create value for the investors. In the case of IBM, it will spend $34 billion on RHT, a company that generates annual revenues of about $3 billion and annual EBITDA of $600 million.

This deal will be financed by debt and stock. IBM has more than $14 billion in cash and short-term investments. However, it also sits on a large debt load of more than $46 billion, which will rise to about $80 billion with this transaction. Already, S&P Global (SPGI) has lowered the company’s credit rating while Moody’s (MCO) has put it on review. The combined company will have an annual EBTDA of ~$17.2 billion. Dividing the approximate total debt by the total annual EBITDA gives you a debt-to-EBITDA ratio of 4.65. This is much higher than that of its peer old tech companies such as Oracle, Microsoft, Cisco, and Intel whose multiples are approximately 3.35, 1.75, 1.56, and 0.84 respectively.

As shown below, the debt has gone up by more than $20 billion in the past ten years. The chart shows the growth in long-term debt and the outstanding shares. This is important because, as mentioned above, the company has financed most of the buybacks using debt. Therefore, adding debt while reducing cash could prove disastrous if the anticipated synergies don’t work out. 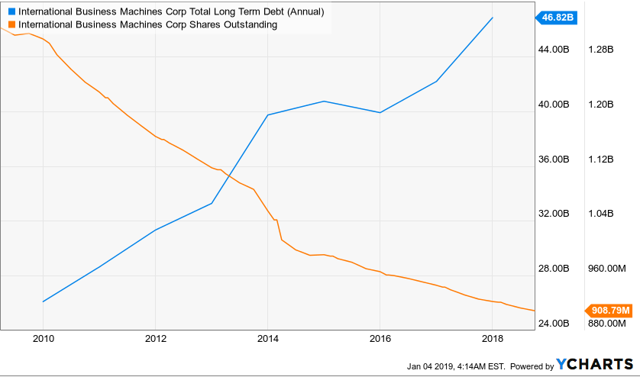 IBM has been an American icon for more than a century. While the company has survived key geopolitical events like the two world wars and the depression, it is currently facing the biggest test ever. With its cognitive solutions faltering and with new companies taking market share in cloud computing, the company will likely continue to struggle to find growth.

Disclosure: I am/we are short IBM. I wrote this article myself, and it expresses my own opinions. I am not receiving compensation for it (other than from Seeking Alpha). I have no business relationship with any company whose stock is mentioned in this article.

The Obamas Ink Deal With Spotify to Produce, Host Podcasts

Managing the 5G Hype Is Critical to Carriers – Light Reading