Microsoft’s hardware division has done some fine work over the past few years – and the Surface Laptop is arguably the best thing it has produced so far. It has its flaws, but when the MacBook Air was left to stagnate for years without an update, the Surface Laptop valiantly filled the hole for a reasonable price.

Now that Apple has reintroduced its popular ultraportable, though, does the latest iteration of the Surface Laptop still hold the same appeal?

Microsoft Surface Laptop 3 review: What you need to know

The Surface Laptop 3 looks a lot like the previous generation, but it has a few notable new features. For one, to go along with the introduction of Intel’s latest 10th-gen CPUs, Microsoft has at long last added a USB Type-C connector to the Surface Laptop, replacing the single-purpose Mini DisplayPort output.

The laptop also now has an SSD that’s upgradeable (albeit only by engineers) rather than being soldered directly to the motherboard, and a new dual far-field microphone array designed for clearer videoconferencing – and to make talking to Cortana easier (oh goody). A 15in model is on offer for the first time too, for those who want more desktop real estate to play with. I’ll be following up with a review of that model as soon as I receive one for testing.

Add those changes to what was already a rather excellent laptop, with a 3:2 high-DPI display and a decent keyboard and touchpad, and you have yourself a very viable rival to the MacBook Air.

When it comes to price, the new Surface Laptop gets off to a good start: while the MacBook Air starts at £1,099, the entry-level Surface Laptop 3 is just £999.

There’s a good spread of configurations available too, so you’re bound to be able to find something that suits your needs. Here’s a breakdown of all the models:

Of course, the MacBook Air isn’t the Surface Laptop 3’s only rival. The new Dell XPS 13 is in the same class when it comes to design, ergonomics and portability, and it’s slightly cheaper for equivalent specifications. The starting price is higher, though, at £1,199, as the minimum storage specification is 256GB.

The size and shape of the Surface Laptop 3 are, to the millimetre, identical to those of its predecessor. That’s fine, because it’s a thoroughly likeable design.

Just like the MacBook Air, it’s wedge-shaped, tapering from a fairly thick 14.5mm at the rear to a thinner 10mm at the front edge. It does look more angular, with less gently rounded corners and edges that are cut away on the left and right edges, and it’s also a little heavier, wider and deeper than the Air. At 1.29kg, though, this is not a laptop you’re going to worry about carrying around with you: it’s effectively as slim, light and portable as laptops get.

For those who care about the colour of their laptops (for the record, I don’t give two hoots), the Surface Laptop 3 comes in five different colours and two different finishes. I tried the new Sandstone colour, but you can also order most models in Platinum, Cobalt Blue or Black. Note that the Black and Sandstone models don’t have the controversial Alcantara fabric on the wristrest, for those who prefer a wipe-clean finish.

The other new design element is the upgradeable SSD. Be warned, though: Microsoft says this isn’t a user-upgradeable machine, and that only qualified professionals should be prising the rubber feet off and unscrewing the bottom plate to get at the storage slot. That’s a shame when the new Surface Pro X has a small hatch that can be flipped off for super-simple access to the SSD.

It’s also a shame that Microsoft didn’t add more than a single USB 3.1 Type-C port. Still, it’s good that there’s still a full-sized USB Type-A port next to it, so you can easily connect older peripherals without having to mess around with adapters and dongles.

As with previous Surface Laptops, the keyboard is an absolute peach. There’s nothing fancy about it – no low-profile butterfly switch keys here – just a well-spaced, Scrabble-tile layout with keys that have plenty of travel and soft yet firm feedback. It’s a joy to type on: you’ll be up to speed in no time, and three levels of backlighting ensure you’ll be able to type in darkened meeting rooms and lecture theatres.

Likewise, the touchpad is superb. It’s a diving board-style design that’s hinged at the top and doesn’t have separate buttons, but it’s reliable and works perfectly. Clicking doesn’t feel hollow, squishy or heavy as it does on so many rival machines; as Goldilocks put it, it’s just right. In my view, it’s one of the best touchpads I’ve used on any laptop.

The display on the Surface Laptop 3 measures 13.5in from corner to corner, and it’s as sharp as you need at this size, with a resolution of 2,256 x 1,504 and a pixel density of 201 PPI. This gives it a square-ish 3:2 aspect ratio, which feels a lot better suited to office work than the 16:9 screens many competing laptops use (such as the Dell XPS 13).

It looks great, too. Its maximum brightness of 365cd/m2 isn’t exceptional, but it’s fine for most conditions you’ll likely be using the laptop in, and the display reaches a superb 97.5% sRGB coverage out of a total gamut volume of 99.2%.

It’s just a pity that the screen doesn’t go beyond sRGB, as the MacBook Air has now moved to the larger P3 colour space. If you switch to “Enhanced” mode in the laptop’s display settings you do get slightly boosted contrast, but that’s still a long way off a proper wide-gamut display.

The laptop’s speakers meanwhile are pretty darned impressive. They go surprisingly loud and rarely distort nastily. They don’t have much in the way of body, so I wouldn’t want to listen to anything but very simplest acoustic tracks on them, but for podcasts and talk radio they’re absolutely fine.

The Surface Laptop 3 comes with a top-end 10th-gen Intel processor – either a Core i5 or a Core i7, depending on which model you choose. Sadly, where we previously tested the Core i5 version of the Surface Laptop 2, Microsoft sent us a Core i7 model this time, so I’m not able to make a direct comparison between the two generations. Still, our benchmarks show that it’s a good deal quicker than the 2019 Dell XPS 13 we tried out, which used an 8th-gen Core i7. 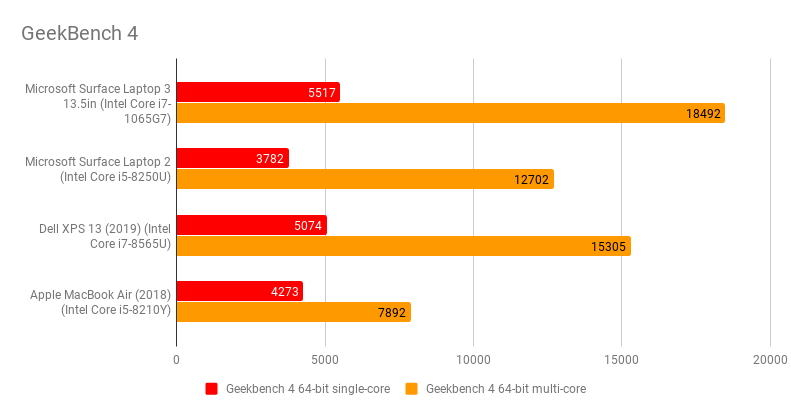 Both the i5 and i7 models also have vastly improved graphics over the previous generation. Our graphics benchmarks show a clear advantage for the Surface Laptop 3, with its Iris Plus GPU, over both the MacBook Air and the Dell XPS 13. 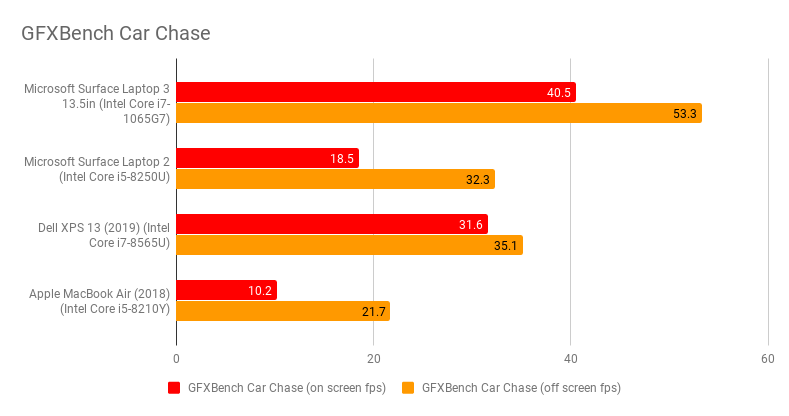 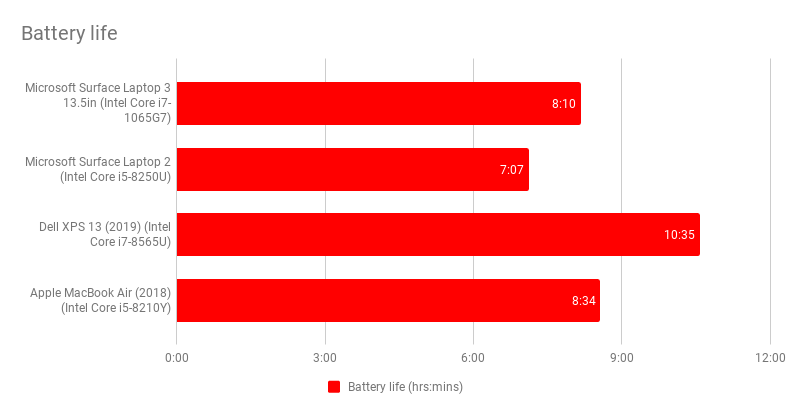 Equally eye-catching is the performance of the Surface Laptop 3’s SSD. The original Surface Laptop was hobbled by sluggish storage, but even the second-generation model is left in the dust by the Toshiba BG4 M.2 NVMe SSD used here. It’s more than a match for the Dell XPS 13, and the Apple MacBook Air. It’s also good to see that you’re covered when it comes to Wi-Fi future-proofing with Intel’s Wi-Fi 6 AX201 wireless card providing wireless connectivity.

Finally, battery life is decent, too. The Surface Laptop 3 lasted 8hrs 10mins in our video rundown test, with the laptop in flight mode and the screen adjusted to a brightness of 170cd/m2. That’s no better than its rivals but, equally, you won’t do any better elsewhere.

The Surface Laptop 3 is a very good laptop. It’s light, slim and good looking, with performance across the board that’s a match for the best in the business. It’s more practical than previous models, with non-Alcantara options that won’t get grubby, and a good spread of specifications means you can choose a model that suits your requirements and not pay more than you need to.

There is the odd area of weakness. It’s high time Microsoft moved to wide-gamut displays on its hardware and, ideally, I’d have liked to see a Thunderbolt 3-equipped USB Type-C port, rather than plain old USB 3.

But these are relatively small complaints. If you want a laptop for work and, maybe, a little play, the Microsoft Surface Laptop 3 is a brilliant option with very few significant shortcomings.

Migrating SaaS to Cloud: How to do it without disruption – Techiexpert.com

Analysts at Credit Suisse Reiterated their “Hold” rating for VMware (VMW) with $185 Target;...