In his first big public appearance as Google Cloud’s chief executive, Thomas Kurian today sketched a vision of the company as a breath of fresh air for enterprises grappling with how to move to the cloud without jettisoning their core applications.

The longtime Oracle Corp. veteran (pictured), who joined Google LLC’s cloud unit in January following the departure of former CEO Diane Greene, debuted a number of new services today at Google’s Cloud Next conference in San Francisco, in large part aimed at making it easier for developers especially in large enterprises to create and run applications securely in its cloud.

In particular, he touted Google’s platform for bringing its cloud services to corporate data centers, where many organizations still do most of their computing and likely will for some years to come. Kurian described Google’s “hybrid” cloud approach, which allows information technology staff to get the speed and cost benefits of the cloud on-premises, as more accommodating than either traditional information technology companies or its much larger cloud rivals, Amazon Web Services Inc. and Microsoft Corp.’s Azure.

One sign of Google’s focus on its cloud computing push was the appearance of Kurian’s boss. “Cloud is one of the most important investment areas for Google,” Google CEO Sundar Pichai told the audience, noting that this year, Google would use enough steel in building new data centers to build 20 Eiffel Towers. And addressing a longtime concern of Google enterprise technology customers, he added:  “And we are in it for the long haul.”

Another sign of the importance Google places on its cloud computing efforts is Anthos, an updated and rebranded hybrid platform, formerly called Cloud Services Platform when it was introduced last year, that’s now generally available on 30 launch partners, including major data center hardware providers such as Dell EMC and Cisco Systems Inc. The term means “flowers” in Greek, and Kurian is clearly hoping it will help Google sprout new business with large enterprises. 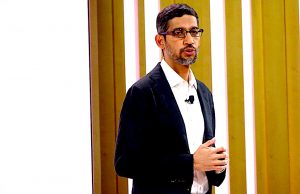 The new wrinkle besides the name is that Anthos, which runs on the Google-developed open-source software container management Kubernetes, will be able to run applications unchanged on any cloud, as well as in on-premises data centers, Pichai promised. “This gives you the flexibility to move apps to the cloud when they’re ready,” he said.

In addition, Google announced Anthos Migrate, a set of services to enable on-premises applications to be moved to the cloud. “We believe Anthos will be the cloud platform of choice for years to come,” said Anthos product management director Jennifer Lin. And in a symbolic gesture, she showed Anthos running on AWS’ cloud.

Google boasted of a large number of new customers, such as McKesson and Philips in healthcare, JPMorgan Chase and ANZ Bank in financial services, Sprint and USA Today in media and telecommunications, Unilever and Procter & Gamble in retail and Bose and UPS in manufacturing and industrial.

Kurian also revealed a raft of other news today, which included a new “serverless” or highly automated cloud services platform called Cloud Run, a series of deals to manage software from seven leading open-source providers on Google’s cloud and a couple of new cloud data center regions in the U.S. and abroad.

Not least, Kurian emphasized a key point that has little to do with technology: Google’s lagging position in providing sales and support to large enterprises. Echoing a promise he made as soon as he arrived, Kurian vowed, “We’re massively expanding our go-to-market organization,” not just in sales but also technical support.

Although Google still makes the vast majority of its revenue from advertising on its search engine and website partners, its cloud operation is becoming more central to its long-term prospects every day. That’s because rivals such as Amazon.com Inc. and Microsoft’s cloud units are far ahead in revenue and mindshare among many companies from startups to large enterprises.

Even more important, increasingly the cloud is a black hole sucking in everything from apps to enterprise software and data centers and the rest of traditional information technology. If Google can’t gain ground in the cloud, using many of the technologies it invented for its own vast operations, it’s not clear it can maintain its growth and influence in technology at large.

As a result, Kurian’s every utterance and sign of new positioning are being watched almost as closely by investors as the Fed chairman’s pronouncements. What they’re hoping to hear more than anything is how he can capture more of the large enterprises that have yet to move the vast majority of their operations to the cloud, meaning they represent the largest potential for gaining ground.

But Google’s enterprise efforts have come in fits and starts for the better part of a decade, which is why Kurian’s Oracle chops are seen as so important. Even after today’s keynote, it’s not yet clear Kurian managed to do that, though to be fair, that was always going to be a multi-year process.

“I love customer logos and on-stage testimonials, but what we all want are financial details, 51% deep customer details, and deal-size granularity,” tweeted Patrick Moorhead, president and principal analyst at Moor Insights & Strategy.

… We’d like to tell you about our mission and how you can help us fulfill it. SiliconANGLE Media Inc.’s business model is based on the intrinsic value of the content, not advertising. Unlike many online publications, we don’t have a paywall or run banner advertising, because we want to keep our journalism open, without influence or the need to chase traffic.The journalism, reporting and commentary on SiliconANGLE — along with live, unscripted video from our Silicon Valley studio and globe-trotting video teams at theCUBE — take a lot of hard work, time and money. Keeping the quality high requires the support of sponsors who are aligned with our vision of ad-free journalism content.

If you like the reporting, video interviews and other ad-free content here, please take a moment to check out a sample of the video content supported by our sponsors, tweet your support, and keep coming back to SiliconANGLE.